A chat with Joy from The Knitting Goddess.......

Many thanks for taking the time to answer a few questions for BritYarn.  If you are sitting comfortably with a beverage to hand lets begin!

Could you introduce yourself to BritYarn’s readers?

Waves hello! I’m Joy and along with my long suffering other half Bobbie I own and run The Knitting Goddess. The main part of my job is dyeing yarn, updating the shop and chatting online. Bobbie is responsible for producing all of the mini skeins, packing and posting and making sure that everything goes out in good time. We’ve recently started selling screen printed bags and pouches, so we’re both involved in that. I also do some teaching, and now that we’ve moved into the new workshop there’s lots more space for people to come and play.

I love the fact I can do lots of different things as part of running the business – I’m always interested in learning and trying new things.

How and when did The Knitting Goddess come about?

The business started completely by accident about 10 years ago. We’d been in Seattle on holiday and I bought cashmere to make a jumper. When I got it home I realized that although the batch numbers were the same the skeins looked quite different. So there was a change of plan to something multicoloured and I bought a couple of pots of dye. We then found somewhere that would sell us mill ends of cashmere and started selling on Ebay.

The first big change to the business came about when we moved to the Isle of Wight. The house we bought needed a huge amount of work and it wasn’t going to be possible to continue working as a therapist while chaos raged around us. So we got a bit more serious about the business and looked at ways to grow it.

The second big change for the business has been moving to Harrogate and finding dedicated workshop space. It’s bliss to have somewhere that I can make a mess and shut the door on it – and it’s also meant that we’re reclaimed some of our weekends and evenings. Having more space has also allowed us to offer more wholesale, so there are more places that people can buy our yarns.

The other big change that came about because of our move was switching to British fibre. We now live within an hours of several mills – and it seemed absolutely crazy not to support that. So all of our fibres in the shop are British (or British Territory) grown with the exception of the cashmere – and if we could find a British producer for that I’d look at swapping that over too.

What are your favourite woolly / fibre crafts?

I’ve played with lots of different woolly crafts but I’ll always be a knitter more than anything else. I learnt to crochet last summer, and while I love the speed I have to constantly look at my work, so it’s not always something I’ll pick up to take with me. Vanilla socks make the perfect travelling companion.

Everybody works in different ways… are you a traditional pen and paper person or do you prefer making full use of modern technology?

A bit of both – I love Pinterest and Instagram and I’d be lost without Ravelry. I still work with a paper diary though, and there’s a daily to do list that things get crossed off. Although there are great drawing apps I’d sooner pick up a pencil and doodle or sketch.

If you were only allowed to knit with (or dye) one British grown base what would it be and why? (a blend or 100% pure)

Britsock – it’s that rare thing of a yarn which works for pretty much everything, it dyes like a dream and it doesn’t tie itself in knots in the dye pot.

I adore Britsock, Could you share how this yarn was born?

We knew that we wanted a British yarn which would wear well for socks and be as close to an all purpose yarn as possible. We also wanted to avoid the processing which is needed to make a yarn superwash. I know it’s sometimes necessary, but we did everything we could to make this yarn be amazing and hard wearing without it. Adding nylon and British alpaca into the mix and having the yarn spun to a fairly high twist have both helped create a yarn with wears amazingly well and which is a pleasure to have next to your skin. 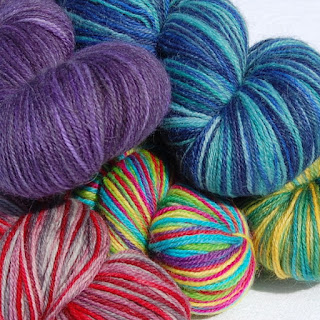 John and Juliet Arbon did an amazing job with the yarn. We were so nervous when the first box arrived – when you order a custom spun yarn you don’t know exactly what you’re going to get, but this was better than I’d dared hope.

Where do your get your inspiration from for the amazing semi solids, variegated and self striping yarns you dye. Do you have a favourite shade?

There’s a noticeboard which sits just t the side of my computer at home, and it houses a collection of postcards that I’ve bought because I love the colours or ideas that they represent. I also have a colour board on Pinterest where I collect anything and everything that appeals to me.

One of the delights of having this as a job is that if something doesn’t turn out as planned then it can often become something different but special. Or something that will make socks to be hidden under boots……

One of my favorite ever shades was called Undead – and that came about someone was typing about undyed yarn and autocorrect thought it knew better. So I had some fun imagining what colour Undead yarn would be (deep violet and plum, overdyed with charcoal). I must dye some more of that soon.

Left to my own devices there would be a lot of blue yarn in the shop – everything from pale sky blue through turquoise to dark navy. I do enjoy getting to play with lots of colours, but if I had one last pot of dye it would be blue.

Are there any future plans / projects you can share with BritYarn?

We’ve got lots of things planned!

We’ve been chatting with Amanda (Ex Natural Dye Studio) and we’re looking at ways of providing yarn support and some new colour options. While I’m sad that Amanda has stopped dyeing, I’m thrilled that there will lots more amazing crochet designs to enjoy.

The 2015 clubs are coming to an end as the last parcels will be posted at the end of October. We have two amazing designers for 2016 – and there will also be a self striping yarn club.

We’ll be running another mini skein competition with Rachel from mylifeinknitwear.com before the end of the year. That was great fun, and so inspiring that I ended up dyeing 10 sets of mini skeins instead of one.

How can people best keep up to date with the latest The Knitting Goddess news?

We send out a newsletter every Thursday which offers subscriber only discounts and other treats. You can sign up for that here http://theknittinggoddess.co.uk/newsletter.html

Don't forget our Britsock competition runs until the end of October in BritYarn's Ravelry Group.
Posted by Unknown at 12:56

Email ThisBlogThis!Share to TwitterShare to FacebookShare to Pinterest
Labels: Interviews, The Knitting Goddess